The beginning of spring brings new opportunities for the macro photographers. In Europe, Squills (Scilla spp.) start flowering by the end of February. There’s a growing population of it close to my home in the city park of Budapest, each year I find more and more plants. Now I visited the site with a camera and used a newly discovered vintage lens of my father’s ancient Praktica. This is the Meyer Optik Primoplan 58/1.9 which is famous of its unique bokeh.

I had to attach a short extension tube and a 1.5x teleconverter from Vivitar, to achieve the required magnification.

Each shot taken handheld on a low angle, illuminated by the natural light.

Later I decided to take some wide angle shots with an Olympus OM Zuiko Auto-W 24/2.8 objective. This lens is a superb piece of glass with a very short (34mm) and small diameter body. It has an excellent, 25cm closest focus giving the ability of macro shots. This will show you the surrounding area with big trees and buildings in the background:

Since I am very close to the plants here, illuminating the foreground is necessary. The best way to avoid unnatural impression is to use a diffused twin flash with reduced power. Mine is a DIY-ed Canon-Minolta blending and it doesn’t let me adjust anything so must play with the sensitivity and the distance of the flashes.

At last here are some older macros starring ants (Prenolepis nitens) on the flowers, taken with Canon’s MP-E65 macro lens: 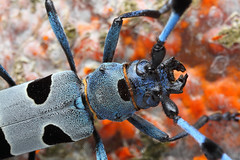