Lamprodila festiva despite its small size (5-10 mm) might be one of the most spectacular jewel beetle (Buprestidae) in Central Europe. The species is native to Hungary, although it was discovered only in 1999 near the southwestern border in a juniper (Juniperus communis) woodland. Its known host plants are the members of the coniferous  family of Cupressaceae. Till now we did not find it elsewhere in the country, but last year some amateur entomologists reported its presence from different points of Budapest, always related to dry whitecedars (Thuja occidentalis) and false cypress (Chamaecyparis sp.). As the news spread I looked for the signs of the beetles late in the season. Surprisingly, I find dozens of exit holes in gardens, even in the district when I live!

Exit holes can be seen mainly on the trunk:

This year‘s spring I have collected pieces of cut Thuja trees along the streets. Galleries of the larvae were present in high number but the insects were already inside the wood, probably in their pupal chambers.

A fully developed pupa shortly before the last molt:

I kept the wood in a plastic bag on the balcony. In late May the adults started to come out:

Looking the woods closer, some of the holes were still not left:

I waited a few minutes and the beetle tried to leave. The moment of the coming out was really short so I could take pictures only with the peeking head:

Few days later a friend found a place where hundreds of adults were sitting on small living trees. Here’s his report along with other xylophagous beetles:

I’ve also visited the place to shoot them in their habitat.

Wide angle photos to have the idea about the unnatural circumstances:

With my friend who is looking for a beetle fallen down to our approach (another one stayed on the plant):

Two focus stacks for a better depth of field:

This species is not alone on the woods, I found individuals of the tiny parasitic wasp Metacolus unifasciatus (Hymenoptera, Pteromalidae). It is not clear to me if they are related but there’s a chance.

As a macro-photographer, I have a wishlist what I would like to see and shoot from the world of arthropods. One of the targets was the endemic ground beetle Duvalius gebhardti found only in a small mountain range in Hungary. Its way of life is still unclear. All we know that adults live in narrow caves and crevices in the karst.
I visited one of the known habitats, a cave in the Bükk Mountains with young biologists and a caver, and luckily, we found a few living individuals. Now let’s see the pictures of the short excursion. Some of the photos were taken by a member of the team, Márton Szabolcs.

Weird company walking to the cave.

Before disappearing in the dark.

Ouch, this is really strait! Claustrophobics turn back!

A lesser horseshoe bat (Rhinolophus hipposideros) spending the winter deep in the cave.

On the walls we could see large parasites of the bats. These ticks (Ixodes vespertilionis) differ from the common ones in their long legs.

Another one, looking to be starving:

A young fire salamander found almost 300 m from the entrance. 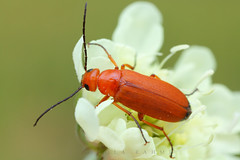